“There are three kinds of lies: lies, damned lies and statistics.” – Mark Twain

On March 1, Trump released his Administration’s trade policy. The thinking reveals why Trump has so many business failures.

The key objectives of the Trump administration’s trade policy have merit. But the way that employment statistics are used to support the strategy to dismantle the trade agreements that are crucial to the United States is disingenuous.

Key to the argument are the manufacturing jobs that have been lost in the United States since China joined the World Trade Organization (WTO). They argue that in January 2000, there were 17,284,000 manufacturing jobs in the United States, but by January 2017 there were only 12,341,000, a loss of almost 5 million jobs. In January 2000, the unemployment rate was 4%. January 2017, the unemployment rate was 4.8%. The difference for the economy as a whole is 1.75 million jobs, not the 5 million the Trump and his team claim are manufacturing alone.

The benefits of trade have been understood for centuries. In 1817, in his theory of trade, Ricardo explained the idea of comparative advantage – countries do what they do best, exporting their excess capacity, importing what they don’t produce themselves. It is efficient and is win win.

Now though, the figures show that the majority of the people in manufacturing have moved on. 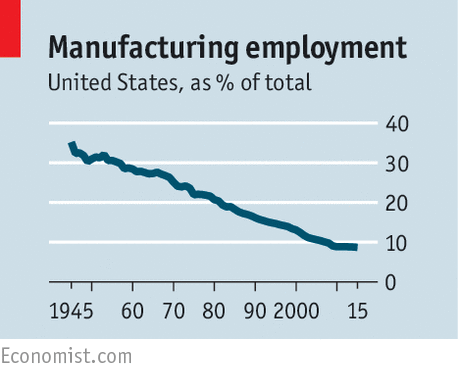 The trade with China has not changed America’s long term trend moving away from manufacturing[2]Scrimping on sense.

Not only that, worldwide less people are employed in manufacturing as automation takes hold. In a recent paper, the authors argued that 47% of jobs are at risk[3]The Future of Employment: How Susceptible Are Jobs to Computerisation?, mostly in routine intensive occupations. John Maynard Keynes 1933 prediction is coming true.

Peter Navarro, Trump’s trade czar, styles himself as a China expert. Navarro has written three books on China, which according to James McGregor, a former chairman of the American Chamber of Commerce in China, “have close to zero credibility with people who know the country,” and are filled with “hyperbole, inaccuracies” and a “cartoonish caricature of China that he puts out.”[4]Trump’s Top China Expert Isn’t a China Expert

Navarro’s argument that China is undervaluing its currency is outdated.

The dumping of goods is true only for the China;s troubled industries, steel being the big one. The protection of the country’s industries is a legitimate complaint, but America is equally guilty. Ask anyone who has suffered the absurdities of the Fly America act.

The theft of IP has a degree of legitimacy. That requires that Chinese authorities to enforce American rights. Starting a trade war is not an incentive to fix that.

Navarro and Trump think that the TPP, the TTIP, and WTO are worthless. They believe that they can get better deals for America through bilateral trade agreements.

Good luck with that.

More at:
Cheap automation raises risk of ‘premature deindustrialisation’
Donald Trump’s review of trade deficits is a blast from the past
Economic Impact of Trade Agreements Implemented Under Trade Authorities Procedures, 2016 Report
The Future of Employment: How Susceptible Are Jobs to Computerisation?
KORUS of disapproval
The Mind of Donald Trump
Premature Deindustrialization
Robots and Jobs: Evidence From US Labor Markets
Scrimping on sense
Trump’s Meeting With China Is Difficult Because The Donald Is Wrong About Trade, Deficits And Jobs
Trump’s Top China Expert Isn’t a China Expert
Unemployment numbers not ‘phony’ to Trump anymore
Working for Trump is an embarrassment